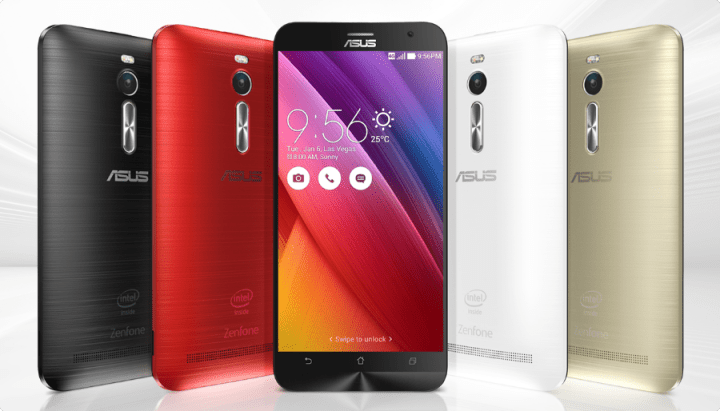 With a standard laptop like CPU featuring 4GB RAM & 64bit – 2.3Ghz Intel Atom quad-core processor, feature-wise ASUS Zenfone 2 is a powerhouse. It has variety of color and storage options. Zenfone 2 comes in five different colors and three different variants of 16GB/32GB/64GB internal storage with expansion supported to an extra 64GB through MicroSD cards.

Zenfone 2 has almost the same look, if compared to former generation, with brush metallic finish and incredibly thin look at edges. Asus Zenfone 2 has a 5.5 inch full HD IPS display of resolution 1920×1080 pixels. Zenfone 2 devices run on the customized version of Android lollipop branded as ZenUI.  ASUS introduced ZenUI with their first generation Zenfone devices (4, 5 & 6) and improved it further with later releases. It is a completely customized version of Android’s stock User Interface with added new options. Zen UI appears highly polished & ultrasmooth when you start playing with. It’s clean, light yet combined with the perfect choice of colors.

64bit dual channel – 4GB RAM is just crazy. This gives user the independence to do whatever he wants. Intel’s quad-core 2.3GHz Atom Z3580 processor, with PowerVR G6430 graphics chip powers this freedom to a whole new level. ZenFone 2 is made for hardcore gamers and multitaskers.

The following user-made multitasking test will show how good is ASUS ZenFone 2 in running intensive games:

Asus Zenfone 2 has dual-sim support for 2G, 3G and 4G networks. SIM at first slot may enjoy the speed up to 4G, but only 2G network is supported on the second sim slot. It also has other standard connectivity features, like microUSB 2.0, Wi-Fi, Bluetooth 4.0 and NFC.

As far as power is concerned, Zenfone 2 has an unreplaceable battery of 3000 mAh which, in fact, appears slightly insufficient to the phone with such huge specifications. However, Zenfone 2 can be easily charged in minutes with their awarded fast charging technology.

Zenfone 2 comes with 13MP Pixlemaster rear camera & 5MP selfie-shooting camera on the front. Promised as world’s best low light camera, PixelMaster has been highly praised for the photo & video quality. PixelMaster is a highly configurable camera with a variety of scene modes available for quick & adjusted capturing. Supported by realtone flash the camera adapts itself for both the low and high light situations and, gives clear and realistic photos.

Already been a success in the Europian market, Zenfone 2 is aimed to be an inevitability for hardcore users at a discrete price. Asus has not yet revealed the price of Zenfone 2 yet, but it’s predicted to have the very competitive price of around ₹ 20000. Asus Zenfone 2 is available in the mid-range of price, which is 12999-19999.  No 4GB RAM smartphones are available in India below this price point. Asus Zenfone 2 will be available to order on Flipkart from April 23, 2015.